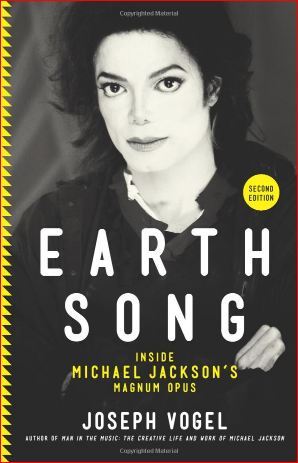 Joe Vogel’s book “Earth Song: Inside Michael Jackson’s Magnum Opus”, now available in an updated and expanded 2nd edition, reveals both the genius and hard work of the creative process required to achieve such a master work of popular music.

Vogel tracks the evolution of Earth Song beginning with Michael Jackson’s initial ideas in 1988 for an anthem for the earth, informed by his evolving religious views and growing awareness of global issues. The book follows the development of the song clear through to its release as a track on the HIStory album in 1995, and then as the third single from the album (but, tellingly, not in the United States).

Vogel also assesses the (mostly dismissive) critical reaction, and looks at the impact of Michael’s controversially-perceived live performances of the song as pieces of highly effective performance art that were “so transcendent and unifying for audiences”.

But it all gets back to the song, and stripped of much of the theatrics, as at the one-off Brunei concert in July 1996, Michael Jackson delivers a truly unforgettable performance, “[t]here are no props, no pyrotechnics – just him, the mic, and the music.”

Vogel’s examination of the writing and recording of Earth Song reveals the lengths to which Michael, and those working closely with him, went in order to achieve the results to which MJ was committed. Such perfectionism can mean a delay of years, as in the case of Earth Song before it reached the desired state of completion to the artist’s satisfaction. And, indeed, like the earth whose anthem it was intended to be, Earth Song was an embryo that required a long period of gestation before coming to full term and being fit for launching into the world.

This 2nd edition of “Earth Song” (the book) has a wealth of footnotes, and these are invaluable in fleshing out the picture not just of the song, but of the individuals who worked on it and their respective experiences collaborating with MJ. Vogel even extricates some worthy quotes and valuable insights from sources less than popular with us fans i.e. Taraborrelli, Boteach and Rolling Stone magazine. Other footnotes include on-line sources, some of which beg the reader to investigate further.

As evocatively documented by Vogel, one moment in the long history of creating this epic song really leaps out at this particular reader. Described as a “hair standing up on the back of their necks” moment for his recording team, it is the night when Michael recorded the final vocals for the song in a completely dark studio, as was his preference. Writes Vogel “From the control room, Bruce Swedien and his crew of assistant engineers couldn’t see anything. Yet what they heard roaring out of the darkness was astonishing; it was as if Jackson was channelling from the lungs of the earth – a pained, fierce, prophetic voice, giving utterance to the suffering of the world.”

Here is a song and a creative process which truly deserves documentation, and not just in book form. We might wish for Spike Lee or some worthy equivalent to take the video footage Vogel refers to (shot when the choral backing for the song was recorded) plus interviews, performances and other relevant material, and turn it into a film a la Lee’s “Bad25” documentary. Only in this case it would be a homage to a single song. Earth Song is certainly a subject worthy of such coverage, and Vogel’s book could provide a more than adequate blue print or script.

And yet, in the end, we can do no better than listen to the song. It is, as the author rightly points out, a song that “seeks to shatter indifference, as it demands accountability. Radio can’t do it justice. It is a song that was created to blast out of speakers if it couldn’t be seen live.”

In discussing the scornful critical response to Earth Song, Vogel describes music journalists as wanting to put Michael Jackson back in his place – back to the “dance music” of his Off the Wall and Thriller days. In other words, the socially and environmentally aware mature man who raged through the microphone at the injustices he saw around him (some of which he personally experienced) was someone they preferred to dehumanise – the better to make fun of him and give themselves an excuse to not take him, or his art, seriously.

The only down side on reading this appropriately serious discussion on Michael Jackson and his art as displayed in one exemplary song, is the sense of frustration in contemplating what ELSE might have been… What if Michael’s energy had not been distracted from the process of creating monumental masterpieces like Earth Song (and others) and, out of necessity, redirected to defending his art, his perceived behaviour and (most shameful of all), his appearance, to his many strident critics. The stature of his talent and celebrity status meant he was bombarded with such criticism, much of it ill-informed, frivolous and deliberately provocative.

What mental and physical energies might he have been able to bring to bear on projects that began as a thought or idea, if only his creative genius had been let flower without the constant demands, distractions and de-tractions heaped on him. It was, as he had earlier sung, “The Price of Fame” (now released on the “Bad25” album). For any of his projects he was not able to bring to fruition, we, society, the planet are the poorer.

Earth Song is the ultimate proof of this. This was a project that DID reach its potential as its creator envisioned it. It is the proof of a master craftsman at work; a man capable of transforming an idea into a musical opus through hard work, dedication and craftsmanship of the highest calibre. As Vogel explains in detail, Michael marshalled musicians, engineers, orchestrators and others in the forefront of their respective musical spheres, and worked on the results until they met his own perfectionist standards.

The Epilogue in Vogel’s book talks, appropriately, of Michael’s plans and rehearsals for Earth Song’s inclusion in the “This Is It” series of shows for his London O2 residency in 2009-2010. It was a song, as Kenny Ortega comments in the documentary film “Michael Jackson’s ‘This Is It'” that carried Michael’s message to the world. It was the final song that Michael rehearsed before his untimely passing. While his undoubtedly brilliant recording of Man in the Mirror has become MJ’s unofficial theme song since his death, it is his self-penned, painstakingly conceived and executed Earth Song for which we should be most grateful.

It is a song that deserves to be heeded as well as heard. As Vogel quotes accomplished composer and conductor Jorge del Barrio (who worked with Michael on the orchestral introduction) “Michael felt that this song was to be the one that ultimately would help save the world.”

We can only hope he’s right.