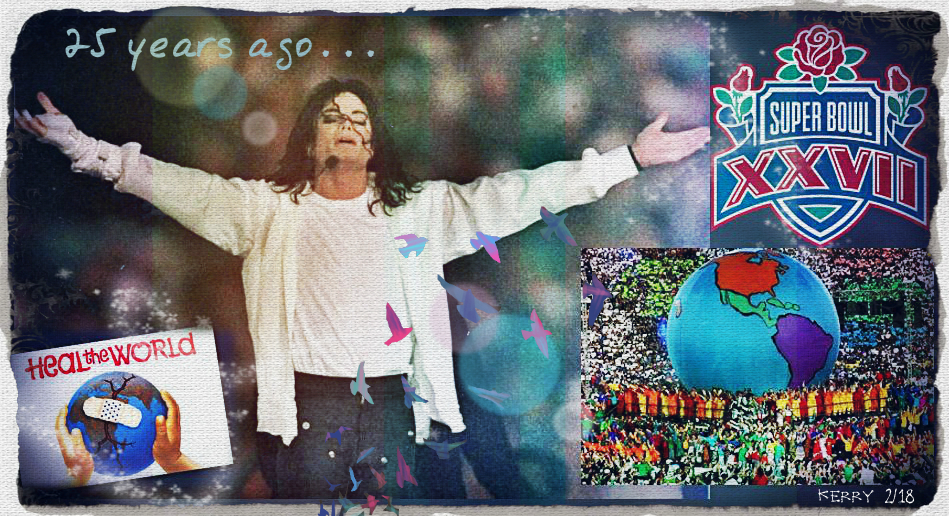 A lot has been written about Michael Jackson’s performance in the halftime concert of the NFL Super Bowl game in 1993.  Super Bowl XXVII was played at the Rose Bowl stadium in Pasadena, California, on 31 January, 25 years ago this year, and is widely acknowledged to have changed the nature of the halftime show and turned it into a ratings winner in its own right.

It was, as one writer described it, a paradigm-shifting performance. (1)

From the material that has been published in interviews with people who were involved on stage or behind the scenes of that show, we can deduce why Michael Jackson would have agreed to be part of a 12-minute show at a sporting event in which he had little interest.  The King of Pop wasn’t into competitive sports, “they make you angry. I’m not into that,” he told Vibe magazine in 2002. (2)

The NFL has a policy of not paying a fee to its halftime performers.  And prior to 1993, the entertainment offered up by the league at its premier showcase event had prompted the television audience to tune out during the break in the game.  Some of them didn’t bother to tune back in – hardly an inducement for sponsors to spend big money to air their commercials during the telecast. (3)

To reverse the downward trend, the NFL looked to the biggest name in entertainment.  Never mind that music critics had started to disparage Michael’s work since the advent of Grunge and other new musical styles.  The “Dangerous” album had been a huge commercial success, and the HBO TV special of Jackson’s concert in Bucharest the year before (1992) had set a record as the channel’s highest-rated special at the time.

There were discussions back and forth between the NFL and Jackson’s management, and finally a deal was struck that saw the league and sponsor Frito-Lay donate $100,000 to Michael’s Heal the World Foundation (HTW) and guarantee commercial time for the foundation’s “Heal LA” campaign in aid of disadvantaged children in the greater Los Angeles area. (4)

Often half-time performers give the audience a medley of crowd-pleasing hits, and doubtless the NFL would have been happy with this considering the strength of Jackson’s back catalogue of number ones.  But Michael wanted to use material from “Dangerous”.  He reportedly said “Billie Jean’s just a tune, it doesn’t mean anything.  It’s a new world; this has to be about ‘Heal the World.’” (5)

One source suggests that Jackson wanted to give an extended performance of “Heal the World” that would occupy the entirety of the half-time show. (6)  The final set-list was, in its well-drilled execution, a happy compromise for which Michael and his touring band had rehearsed for a solid 28 days – right up until the night before the game. (7)

In retrospect, we can look at the Super Bowl show as a mini “Dangerous” concert, in which Jackson made the same spectacular entrance, shooting up from beneath the stage and then standing motionless for a minute and 35 seconds (“that’s like $15 million worth of advertising time” according to producer Don Mischer who admitted it felt like “an eternity”). (8)

Jackson then launched into a short medley of hits – “Jam”, “Billie Jean” and “Black or White”, with their accompanying dance routines – and then he gave them “Heal the World” with a spoken introduction:

“Today, we stand together all around the world, joined in a common purpose to remake the planet into a haven of joy and understanding and goodness.  No one should have to suffer… especially our children.  This time, we must succeed; this is for the children of the world.”

A crowd of 3,500 children, some in ethnic costumes, joined Jackson on the raised platform in the center of the stadium, while a giant globe of the world inflated behind them.  As “Heal the World” rang out around the stadium and on television screens across the world, at the Rose Bowl the crowd held up flip cards displaying cartoon images of children.

This song summed up Michael’s message at the time.  It was the theme song of his charitable foundation, and it was the perfect “sing-along song” for an audience, like the one at the Rose Bowl.  “Heal the World” predated the rage of “They Don’t Care About Us” and the angst of “Earth Song”.  It was happier, gentler material (one critic called it “one of Jackson’s most mawkish songs”) (9) suitable for a mass audience (98,374 at the game and 133.4 million TV viewers in the US, with the global total reaching 1.5 billion) and ending the halftime show on a spectacular, positive note.

While it is acknowledged that Michael Jackson “saved” the Super Bowl half-time show from its slide into increasingly diminishing ratings, 25 years on it should also be remembered that it was the biggest platform Michael could have commandeered to promote his foundation.  His entire “Dangerous” world tour was in aid of HTW; it was the reason he had changed his mind about touring after having announced that the “Bad” tour was to be his last.

Not just changing the game, but changing the world, was what Michael Jackson was about.  The Super Bowl gave him an opportunity to indelibly etch his message into entertainment and NFL (and live telecast) history – and the collective subconscious of those who witnessed it.  He knew exactly what he was doing, and why.

“He was a gentle, quiet man,” Don Mischer says.  “But when he stepped on stage, he became a general.”

The NFL looks back at the 1993 Super Bowl halftime show: